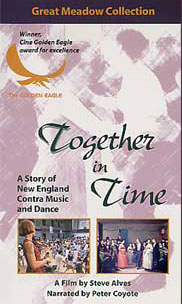 Together in Time Featuring Rodney Miller and Airdance

is a prize winning twenty-seven minute documentary film about New England Contra music and dance. Together in Time tells the story of "the dance that refused to end". Scott Alarik, music writer for the Boston Globe and National Public Radio described the film in the following way:

"Before jazz or rock, bluegrass or blues, New Englanders combined English country dancing with Celtic fiddle tunes and strutting French-Canadian rhythms to form, over generations, a uniquely American dance music called Contra. This is its story, a tender-hearted epic brimming with music as prim as an ice cream social and wild as a Vermont winter; about a dance that refused to end, and the colorful, impassioned folks who kept it alive through Puritan censorship, Civil War, industrial revolution, and an ever changing America. The story is told through the lives of the people themselves: 19th century African-American fiddler John Putnam, seminal 20th century dance caller Ralph Page, ageless mentor Bob McQuillen, and modern pied pipers of contra, Dudley Laufman and Rodney Miller; adorable 101 year old dancer Florence Giffin and 13 year old musician Conor Sleith: stiff collared industrial tycoon Henry Ford, who tried to popularize the dance in the 1920's, and legions of long haired hippies, who found haven from industrialized society in the pastoral clip clop of Contra, but beyond that, "Together in Time" is a provocative social history of how Americans have fun, how they use that fun to build community - and to preserve it."

The Paid to Eat Ice Cream video is a seventy minute documentary which chonicles over seventy years of Bob McQuillen's contributions to contra music and community. His outgoing nature, his role as a mentor to musicians, and the musical contributions he has made are explored in a manner which is humorous, poignant and at times even profound. 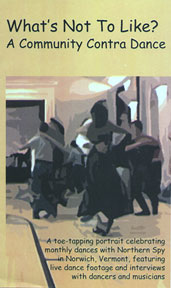 Dancers turn out in large numbers each month to enjoy the lively acoustic music of Northern Spy, a contra dance band based in the Upper Connecticut River Valley of Vermont and New Hampshire. For more than 20 years, this local series has welcomed both experienced dancers and beginners of all ages, keeping alive a centuries-old tradition of New England contra and square dancing. 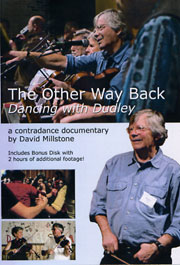 The Other Way Back

A Contra dance documentary by David Millstone offers 99 minutes plus bonus disk with 2+ hours of stories, music and dance.
Musician and caller Dudley Laufman was the charismatic figure at the center of a dance revival in the late 1960s and 1970s whose effects can still be seen in today’s vibrant contra dance scene. Leader of the Canterbury Country Dance Orchestra, whose seminal recordings brought traditional New England dance tunes to musicians around the country, Dudley was the caller who introduced a generation to the traditional repertoire preserved by Ralph Page. Crowds of your people flocked to “Dudley dances” throughout New England, and “Dudley dancers” then spread Contras around the United States and the world. Here is the story of this man with film cuts taken from his long career and stories about him from his many friends.
DVD - $30

A Conversation with Ralph Sweet

Ralph Sweet has been part of the glue that has held New England Contra music together for more than the last sixty years. He has called dances, organized dances, encouraged callers, dancers and musicians alike, and researched the history of contra. His cheerful presence has made the New England Contra scene the wonderful thing it is. David Millstone has filmed Ralph reminising those sixty years.
DVD - $20